The North American missionary to Latin America has his Bible in one hand and his evangelism tracts in the other. He says a quick prayer as he approaches the door and knocks. He rehearses his opening line over and over, hoping that whoever is on the other side of the door will be patient with his broken, heavy accented Spanish. The deadbolt turns. The door creaks open. There’s no turning back now. Buenas tardes. ¿Usted conoce a Jesús? : “Good afternoon. Do you know Jesus?”To which the teenage boy on the other side responds with a smile, ¡Claro, vive al frente!: “Of course, he lives across the street!”

In Latin American and Hispanic/Latino communities all throughout the US, Jesus is not only the name of God’s Son, but also of your next door neighbor, the guy at the convenient store on the corner, the elder at your church, maybe even your uncle. (Pedraja, Jesus is My Uncle, 15). While many of us North Americans of European decent consider it kind of weird to name our kids after God’s Son, our Hispanic brothers and sisters consider it an honor and a constant reminder of God’s nearness.

On the Festival of the Nativity of Our Lord, this is what the Church celebrates: the nearness of our God. 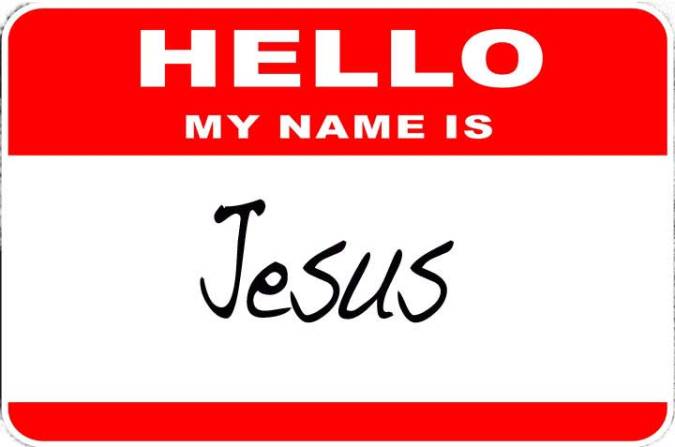 Far too many people picture God sitting up there in heaven, looking down here at us on earth, with an expanse between Him and us so great that it cannot be measured. They envision Him out there in the realm of theology, abstract ideas, and concepts. Far too many people think of God as being far, far away from the mundane and messiness of our human reality. They assume that in order to be close to God, they must think godly thoughts, high and above where we live and where our lives go on.

But where human reason would have us ascend to heaven and look for God up there, out there, somewhere far, far away, the angel that announces the good news of the nativity of our Lord would have us stay down here and hear his proclamation that our God has come down here to us: “For unto you is born this day in the city of David, a Savior, who is Christ the Lord.”(Luke 2:11) He does not direct us anyplace else, than to the flesh and blood of that little baby, wrapped in swaddling cloths and lying in the manger.

In that little baby, laying in the messy little feed trough, God is not far away, but near! In Jesus, the Word became flesh and dwelt among us.

The Word did not come to be perceived and contemplated by the theologians or the philosophers of the world. The Word is not some static idea or statement. No, the Word who became flesh in Jesus is a Word that is living and active, ever present in the midst of His people. He is a Word that comes into the messy mayhem of life on planet earth, and dwells among us.

Or more literally, He “tabernacles” amongst His people. The tabernacle of the Old Testament was the place where the glorious presence of God dwelt in the midst of His people as they wandered through the wilderness. In the midst of the dirt and dust of the desert, the holy, perfect and powerful creator of the Universe would come down and dwell with His people.

He came down and dwelt with His people in a tent that would be set and broken down as they made their way from Egypt to the Promised Land, so that His people would know that He was with them, sustaining them, guiding them, and most importantly, so that they knew that their sins were forgiven.

In the tabernacle of the Old Testament, the priest would offer the blood of the lamb as payment for the sins of the people. God would provide the blood necessary to cover the sins of His people that separated them from Him. God located His forgiveness, life, and salvation in the midst of His people, so that they could be certain that the God was with them.

In the Nativity of our Lord, God locates Himself in the body and blood of Jesus, the Lamb of God who takes away the sins of the world. So, that you and I, His people, can be certain that our God is with us, no matter how far away we feel from Him because of the mess we’ve made with our lives.

Where Satan would have you believe that your sins have made you too dirty for God to come close to you, our Lord would have you take comfort in His blood that covers every inch of you. Where the world tells you that God only exists in the minds of religious people, our Lord tells you the same thing he did to His disciples after he had risen from the dead, “See my hands and my feet, touch me and see.” (Luke 24:39) Where your Old Adam tells you to keep climbing the ladder up to heaven to find God there, our Lord tells you through His angel, to stay in the manger, next to the baby wrapped in swaddling cloths, and look for God there.

We don’t have a Savior anyplace else but where He has put Himself there for us, in the flesh and blood of that little baby. 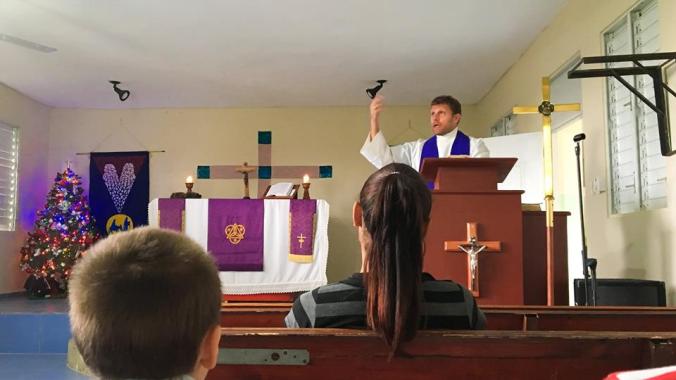 On this Festival of the Nativity of Our Lord, we rejoice that in the flesh and blood of Jesus, our God is not far away, but near. He is as near as the words going into your ears in the preaching of His forgiveness, as the water trickling down your forehead in your Baptism, as near as His body and blood in your mouth in His Holy Supper.

On this Festival of the Nativity of Our Lord, we receive our Lord’s body and blood, which is given and shed for you, so that you can be certain that your sins are forgiven, and that your God is not far, but near. In the Name of the Father, and of the Son, and the Holy Spirit. Amen

This sermon was inspired by reflections by Lutheran theologian Norman Nagel.